RUSSIAN naval activity in the straits has become ‘a matter of concern’, admitted the Gibraltar government. 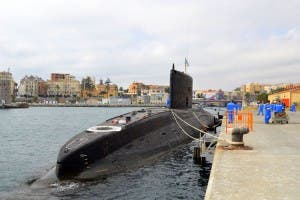 It comes after it emerged that leader Vladimir Putin’s vessels are stopping off at least 10 times a year at the Spanish north African enclave of Ceuta, just 68 km from the Rock.

It has led to a stinging rebuke from a group of MEPs over Russia’s use of Ceuta as a regular refuelling base for its submarines, destroyers and frigates since 2011.

Some 11 MEPs complained to the European Commission that it amounted to a breach of the EU’s sanctions against Putin for his annexation of the Crimea.

A spokesman for the government told the Olive Press: “The use of a Spanish port by the Russians when Spain is a NATO ally must be a matter of concern.”

However, he added: “The defence of Gibraltar is the constitutional responsibility of the United Kingdom and so is any matter related to the presence of Russian submarines in this area.”

A spokesman for the British government’s Foreign Office told the Olive Press that access to Spanish ports is a matter for the Spanish authorities.

“But we have underlined our concern to them about providing such access at a time when Russia is causing so much instability in Eastern Europe,” the spokesperson told the Olive Press.

The Russian stop-offs are granted by the Spanish Foreign Ministry on a case by case basis and bring around €1 million a year to Ceuta’s economy.

This behaviour has not been supported in the US, with one Washington-based think tank, The Heritage Foundation, describing Spain’s willingness to allow the Russian military to operate so close to Gibraltar as ‘a potential security problem’.

“This behavior is unbecoming of 21st-century NATO allies,” it said. “The topography of Gibraltar makes intelligence gathering a core function.

“Having Russian submarines resupply mere miles away presents a potential intelligence and security problem for the U.S. and its allies.”

Neither the British Ministry of Defence or Foreign Office were able to comment as we went to press.