A WISE old journalist once told me that the reporter should never become the story. 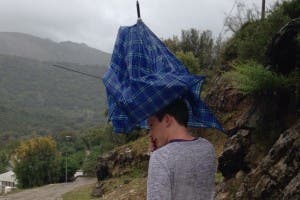 But if you can’t go a little off-piste in your last ever Olive Press article, then when can you?

After all, I’ve written about fraudsters, thieves, gangsters and every type of low-life Costa criminal under the balmy Spanish sun during a fantastically eventful two-and-a-half-year stint.

It’s time to give the likes of Nigel Goldman and co a week off.

Instead, with my last few taps of this well-worn keyboard, I want to celebrate the three most valuable lessons I learnt from living in a new country, from people I will never forget.

Let’s go back to the beginning, when Donald Trump was still a blithering idiot of a businessman and Brexit sounded like a tasty breakfast cereal. I’d left London, my friends and my cosy life behind in search of something new.

First of all was the man who picked me up from the bus station and rented out his room to me in the heart of Estepona. A typical Esteponero – who stuggles to understand why anybody would want to ever leave the town – he took me under his wing and introduced me to Andalucian life.

Tapas, ice-cold lager, happy hours at the port and tapas was the menu del dia, almost every dia.

But the one thing he taught me, above all the cultural hints and tips, is to make sure there are no soap suds left on plates on the draining rack.

‘You can taste soap next time you eat’. Yeah, right.

Moving swiftly onwards, another memorable lesson came while staying in an idyllic hotel in the Serrania de Ronda with a singer from Chicago (that’s a sentence which makes my life sound far cooler than it is).

We arose on the Sunday morning and ventured uphill to mooch around the pretty, white village of Benaojan before heading back down the coast. It was an overcast day, pregnant with misfortune, but, ever the optimist regarding weather, I led us forth despite a lack of raincoats.

Then the inevitable happened.

The heavens, hells and all other biblical lands opened and the rain began to pour, and by pour I mean a billion hydrocharged hoses attacking one tiny, shelterless village.

Every part of me was soaking through and we had completely lost track of the path back down to the hotel. And then I spotted a door slightly ajar as we desperately huddled under a roof-edge.

A plump, old lady’s face peeked out at us, with a frail arm slowly extending. There, clasped in her hand, was our holy grail; an umbrella.

We thanked her inordinately, promising to return the brolly once the storm had passed. And in that moment I saw the true face of Andalucian generosity.

But then the rain came back twice as fiercely and the cheap, broken chino umbrella I’d just been tricked into thinking actually worked crumpled in all of two seconds.

We were left cursing that bitch as we struggled down the hill like drowned rats.

What that day really taught me was to never rely on the cheap generosity of strangers, but to always pack an umbrella if rain is forecast.

Now, it is nigh-on impossible to whittle my experiences down to just three stand-out, epiphanical moments, but there is one more I cannot leave out.

Two friends and I had spent the morning attempting to explore the then yet-to-be-reopened Caminito del Rey, sneaking past security guards and marveling at the jaw-dropping path.

After a quick fanta orange stop, we went for an explore in the sweaty summer sun, clocking up the miles in an old Fiat Kangoo.

We reached an enormous reservoir atop a hill from where we spotted a crystal-clear lagoon, sparkling in the distance like the Emerald City of lakes.

The only problem was, we didn’t have a yellow-brick road or a Dorothy to guide us. So we headed in what we assumed was the right direction for thirty minutes, until it was pointed out that our petrol gauge was flirting dangerously with the empty line.

“Turn round, give up,” came the calls from the back of the car. And I almost did. But I’m so glad I didn’t.

I plundered onwards in hope, and within the hour we caught a glimpse of our fabled lake through an opening in a pine forest.

She was every bit as wonderful as we had hoped.

We parked up, stripped off, legged it towards the irresistible water and in the blissful moment that I dived headfirst in, Ardales lakes stole my heart forever.

The moral is, of course, that cars rarely run out of petrol, and you should only worry if you hear it spluttering and splurging (even then you still have 10 minutes, I’m told).

But I will always regard Andalucia as an extension of childhood, rather than the start of adulthood.

After all, it is effectively a playground for grown-up children.

It’s fair to say I found the adventure I was looking for. And now it’s time for another one.

How can you stay in one place when you’ve got soap suds, a weather forecast and energy to burn?