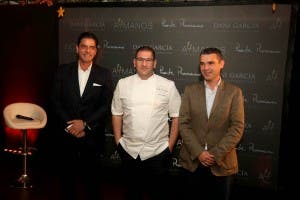 MARBELLA will host seventy one Michelin stars under one roof during its four-day A Cuatro Manos event from Monday 18th April.

In its third year, Dani Garcia’s gastronomical affair will take an international perspective as it hosts chefs from the United States, France and Germany.

Throughout his career, the French chef and restaurateur has been titled ‘Chef of the Century’ by the Gault Millau guide and received the coveted Meilleur Ouvrier de France award.

He continues to operate a dozen restaurants in East Asia, London and the United States.

On the Monday, chefs will prepare a menu of 20 of the French maestro’s most iconic dishes at the resort’s Dani Garcia restaurant.

Tuesday will see the ‘Unplugged’ event, where Dani Garcia, Paco Morales and Angel Leon will create a feast without using any techniques developed after 1995.

Garcia will cook with Eleven Madison Park’s Daniel Humm on April 20th, and create a dazzling meal with Horvath Restaurant of Berlin’s Sebastian Frank on the 21st.