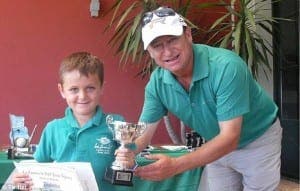 AT just seven years of age, Spanish golfer Yago Mateo warmed the hearts of the nation when he handed back his golf trophy after realising he had made a mistake on his scorecard.

Yago, from the Costa del Sol, was crowned the winner of a youth tournament run by the Royal Andalucian Golf Federation, with a score of 50.

However, when he got home he realised that he had made a mistake and had actually scored 51.

“He was very worried about the reaction of others,” his father said. “It was a genuine mistake but he didn’t want anyone to think he was a cheat, and he really didn’t want his mum to know”

The golfing federation praised the young golfer as a ‘true gentleman’ adding that his ‘honesty and respect’ was admirable.