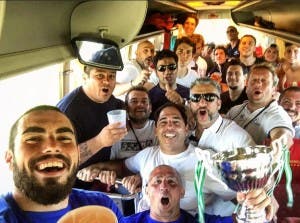 Augusto Nunez opened the scoring for Marbella with a 20th minute try before two penalties from Andres Costa put the Costa del Sol side 11-0 ahead at Puerto Santa Maria.

San Jeronimo responded with a converted try, but a drop goal by skipper Kike Gonzalez and Rodrigo Stuven’s try stretched Marbella’s lead to 21-7.

In the second half, both teams traded successful penalties before two straight reds for San Jeronimo and one for Marbella reduced numbers on the pitch.

Roared on by a large travelling Marbella contingent, Trocadero held their nerve and the lead to claim a famous victory.

The team dedicated the win to Javier García de la Peña, who was injured in the semifinal.