I COULD have sworn I saw the huge, ornate effigy of the Virgin Mary wink at me as she was hoisted down to the sea on the shoulders of a bunch of strapping sailors last summer.

As the sun dipped below the horizon on the most electric night of the year, she was launched out to sea in a dinghy to be greeted by a flotilla of lamp-lit boats laden to their plimsoll lines with revellers, while others waded into the water to get a better look.

This was Estepona on the night of the Virgen del Carmen, a festival that brings expats, Spanish families and holidaymakers down to the water’s edge en masse to watch the proceedings agog.

It’s surely Malaga’s answer to the Oxford-Cambridge boat race, as feisty and Spanish as the UK event is uptight and British.

For many, Estepona is the last bastion of ‘big resort’ charm on the Costa del Sol. 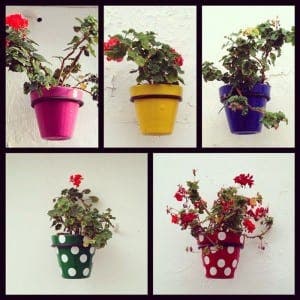 The town has ramped up its appeal with a ‘hanging garden’ of geraniums sprouting from multicoloured pots on every wall of every street, not to mention the colourful murals which can be spotted across town.

And it has gone one better than the plantpots with its exotic glass-domed orchidarium.

The futuristic greenhouse with more than 8,000 species of orchids and three waterfalls has welcomed more than 250,000 people over the last 12 months and they continue to arrive by the coach load.

Sandwiched between the ocean and the high sierras of Bermeja, Estepona does surf and turf in style. And just like the old ditty about Jack Sprat and his wife, between the traditional old town and the bustling modern port which prop up either end of the promenade, there’s something for everyone.

First, grab a fistful of maps from the Plaza de Flores tourist office in the old town’s prettiest square (or the other office in the marina).

With two walking tours, an art walk and a poetry route, the best way to see Estepona is on foot.

The two busiest axes are the beachfront strip (Avenida Espana) and the road through the old town (Calle Terraza), while horseshoe-shaped Avenida de Andalucia curves protectively around the historic centre.

The outskirts are modern, residential and more likely to offer up wacky murals.

Thanks to Banksy, graffiti has gained worldwide acceptance as an art form and Estepona has been quick to respond, turning 24 of its own wall paintings into an al fresco art gallery, marketed as the ‘mural route’.

The writing’s also on the wall for literature lovers.

They can tour the town on a poetry treasure hunt via 22 ditties daubed in different languages.

It’s also kind to your wallet. Expect to pay no more than €1.50 for a café con leche as you while away the afternoon in the winding backstreets where the locals carry on the daily grind to the pattering of fountains.

While the old town’s twisting uphill streets offer a glimpse of life as it used to be in Estepona, the promenade brings you right back to the present with its lycra-clad joggers, giant chess sets and sand sculptors.

But scratch the cosmopolitan surface and you’ll find a lady with a past who has been flirting with civilisation and repelling invaders since neolithic times.

Her story is told through a scattering of watchtowers built to ward off the Moorish invaders, the Arab-built clock tower and 16th century castle ruins.

Disney may only have discovered her in the early 1990s – the town was the original choice for Eurodisney but was pipped to the post by Paris – but Estebbuna was founded during the golden age of the Caliphate of Cordoba in the 10th century.

Destroyed by the conquering Christians in the 15th century and rebuilt by Queen Isabella and King Ferdinand almost a century later, King Philip V granted the town a charter for 600 families in 1728… Compare that to the 60,000-plus residents today – a figure that more than triples in summer months.

The high tourist numbers are unsurprising, and not only because of Estepona’s 325 yearly days of sunshine, 21km of coastline, 17 beaches, 12 chiringuitos, eight golf courses and more spa hotels than you can shake a fluffy white towel at.

Fresh air fiends can sail in the port, go horse-riding, do high ropes at Selwo Adventure park, play padel in the poligono or kick back with a cocktail and their toes in the sand at one of its glorified beach shacks.

The main players are the town beach, Playa de la Rada, 1.5kms of sand dotted with chiringuitos and Playa del Cristo, a sheltered bay with two pleasant watering holes. In fact, the fishy fare served by these ramshackle beach huts is surprisingly good.

In town you can find everything from five-star grub at the beachfront fish joint La Pescadora to the formerly best-kept seafood secret in the old town, Bar Simon, (Avenida Juan Carlos), which is always packed.

After supper, pick up an ice cream on Calle Real or hit the bars: Louie Louie’s is always guaranteed for a good boogie or if you prefer to watch, El Patio puts on a colourful feast of flamenco on Friday nights for €20.

But the marina is the main port of call for Estepona’s bright young things who flock there to see and be seen on weekends.

Several lively bars and clubs freehand pour drinks according to ye old Spanish ‘say when’ system (hic) and will only turf revellers out towards 6am.

After that you can freshen up with a quick swim before breakfast, then face up to a long hot day of paying for the night before – face down on a beach towel.

Alternatively, if you went to bed on time, there are four excellent markets to get up for.

Three are held on Sunday mornings: one at the port (9am-2pm), a rastro in the bullring (10am-3pm), and an artisan market in Plaza ABC (10am-2pm). On Wednesday mornings (9am-2pm) Avenida Puerta del Mar market is the place to be.

Alongside with a large retired population – 30% of Estepona’s residents are from overseas – many 20- and 30-somethings find their way here and just can’t seem to leave.

“I love wandering through the sunlit streets on my 15-minute commute to a local language academy – there’s always a buzz and plenty to see and hear,” says 23-year-old Ed Lloyd from Devon, who has lived here for almost two years.

“Estepona has got under my skin. Tomorrow’s lunch is still swimming in the sea and, high or low season, your euros go so far with fine wine and quality local food.”

He adds: “There also seems to be a team of ’round-the-clock’ Alan Titchmarshes pruning Estepona’s streets into a floral paradise – I love it here.”

While armies of gardeners keep the town spruce, the town is kept safe by an above-average quota of crime-fighters, as Estepona is a police training HQ.

As a temporary Esteponian of one-year standing I have never witnessed any crime and there is a distinct feeling of year-round holiday vibe as Inma, my welcoming Spanish landlady, confirms.

“What I most like about Estepona is the easy-going life,” she says. “In some ways, even when working,  it is like being on a permanent holiday: nice weather, nice people, good restaurants… What else can you ask for?”

Different nationalities mingle happily together in the resort and the cosmopolitan melting pot gets an extra stir with twice-weekly English/Spanish exchanges and a French conversation group.

Hazel Hale, 73, who has been living in Estepona for 12 years, helps organise the exchanges. They average 12 people a time and she is keen to keep the tradition afloat.

“We have opened the Spanish/English exchange to all levels and it’s very sociable and enjoyable,” she tells me.

Polyglots abound and Bastien Eidler, a young Spaniard from Barcelona, relocated to the small seaside town in search of one of Spain’s finest Flamenco guitar teachers, Paco Javier Jimeno, who has won no less than seven national awards.

A quality lifestyle is certainly attainable in this Spanish town conveniently equidistant to Malaga and Gibraltar airports, 20 minutes by car from glitzy Marbella and swanky Sotogrande and under an hour from vertiginous Ronda.

And least visitors are not convinced, to prove the point the town hall is pumping more money in with a new 42-bed hotel in the main square and 100 new underground parking spaces costing just €1 per day.

Once the new development is completed, the old town will boast over 3,000 tourist beds.

But whether that’s a king-sized bed in five-star luxury, bunk beds in a hostel or the sofa in my own crash pad, you will be welcomed as an honorary Esteponian with a free and open invitation to join the locals in all their joyous fiestas: the Virgen del Carmen (wet and wild) the Semana Santa processions (solemn and moving) or San Juan Night (completely crazy), when we all leap over beach bonfires and bathe three times for luck.

So come on in, the water’s fine, and join the party!