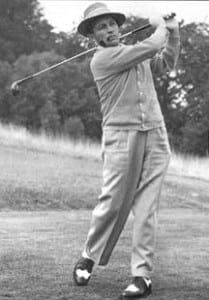 HE bowed out of this world on a golf course in Spain… But the scale of Bing Crosby’s obsession with the world’s greens and fairways has only just been unveiled.

In a new tell-all book – 18 Holes With Bing: Golf, Life and Lessons from Dad – his son Daniel reveals that the American singer was a member of 75 golf clubs.

In addition to running the Bing Crosby National Pro-Am, the crooner was a strong player himself, even qualifying for the 1940 US Amateur championship.

Crosby, whose hits included Swinging on a Star, died of a heart attack in 1977 after completing a day’s golf at Madrid’s La Moraleja golf course.