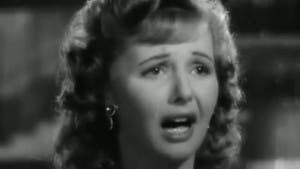 The Hollywood starlet first appears in the 1942 film as the love interest of bar owner Rick Blaine, played by legend Humphrey Bogart.

After being jilted, she gets drunk before later reemerging on the arm of a Nazi officer in a bar in French-controlled Morocco.

But when the Nazi comrades begin singing, fugitive resistance leader Victor Laszlo leads the bar in a stirring rendition of the French resistance song La Marseillaise.

The camera then scans to a close up of LeBeau with tears streaming down her face, in what is one of the most iconic moments in cinematic history.

The image became synonymous with the French resistance, and remains a mainstay of French national pride today.

Much like her character in Casablanca, LeBeau fled Paris in 1940 with her Jewish actor husband Marcel Dalio – whose face had been used on Nazi posters guiding people on ´how to spot Jews´.

They managed to cross the atlantic on the SS Quanza from Lisbon, braving a hurricane alongside another 100 Jews.

They eventually arrived in California, where Dalio used his connections to kickstart their careers in Hollywood.

She died May 1 2016 in Estepona, Spain, and is survived by her stepson, the filmmaker Carlo Alberto Pinelli.