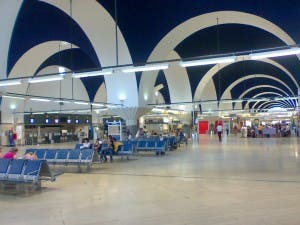 A CIRCUS worker is accused of killing his girlfriend after she missed a flight at Sevilla airport on Wednesday.

The duo got into a heated struggle after she failed to make it onto an Italy bound plane.

Her boyfriend is then said to have strangled her to death and left her body in the car at the airport parking lot.

The man later handed himself in to the Guardia Civil in Huelva, where his circus was based.

He later led police officers to the body.