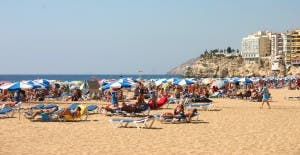 THE Spanish tourism surge is in full swing with new figures confirming holidaymakers are shunning Turkey and North Africa for ‘safer’ European destinations.

While tourist arrivals in April jumped 11.3% to 6.1 million compared with the same month in 2015, tourist numbers for the first four months of the year are up by a massive 13%.

A total of 18.1 million people have holidayed in Spain up to April.

British visitors were up, with 4 million coming over, a 19.4% increase compared to the same period last year.

While visitors to Turkey, which has seen several bombings this year, fell by 28% in April compared to the same month last year.

And it’s not just holidaymakers opting for the safety and sun of the Spanish costas  – recent figures reveal a massive 26% of Brits plan to retire here.