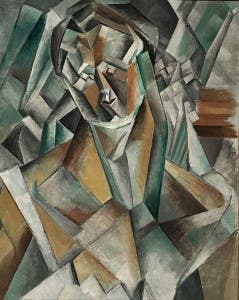 SOTHEBY’S has sold Picasso’s Femme Assise, 1909, in London for €56 million, making it the highest valued Cubist painting ever sold at auction.

Picasso painted the work in 1909, when he was just 27 years old, while on his hermitage in Horta de Ebro, now Horta de San Juan in Catalunya.

The village was so remote at the time, it could only be reached by donkey.

The painting is modeled after Picasso’s lover, Fernande Olivier, with whom he travelled.

The painting represents a crucial juncture of Picasso’s career, near the beginning of his Cubist period.

In fact, the painting comes just one year after the term ‘Cubism’ was first used by art critic Louis Vauxcelles in 1908.

Helen Newman, Global Co-Head of Sotheby’s Impressionist and Modern Art Division, lauded the Cubist piece’s caliber as rare for an auction, as various museums and institutions now hold most of the Malaga-born painter’s more celebrated work.

“I believe that tonight is a clear indicator that the [art] market is alive and robust,” Ms Newman said in a statement.

The Picasso Museum in Spain’s Malaga closes 2022 with more than 640,000 visitors—close to record pre-pandemic numbers