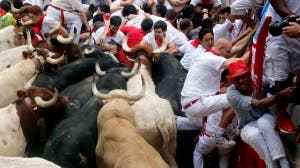 SIX people have been gored in the second running of the bulls at Pamplona’s San Fermin festival.

Five of the victims are foreigners, and two, a 58-year-old Spaniard and a 73-year-old South African, are said to be in a serious condition.

The regional government said one American, aged 55 and another aged 23, have less serious injuries.

A Canadian was also gored but their condition is unknown, while eight others were taken to hospital after suffering injuries.

Several of the six bulls from the run became separated from the pack and began charging at will.

Reports say one bull repeatedly tossed a man into the air.

The run, involving more than 1,000 people, lasted more than double the usual time at six minutes.

The festival runs until next weekend.