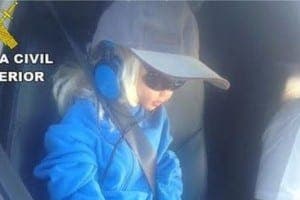 A DOLL dressed up as a passenger has landed one driver a €200 fine after he tried to cheat the carpool lane.

Guardia Civil officers in Madrid grew suspicious when they saw the child-like figure adorning a zipped up hoodie and hat despite the blistering heat.

On closer inspection, the sunglass-wearing figure was found to be a life-like doll the man had attempted to pass off as his daughter.

The man was travelling on the busy A-6 motorway, which connects Madrid to the North-West of Spain, when he was pulled over in order to ‘explain his strange companion’.

Carpool lanes have been introduced in parts of the city to encourage people to travel together and reduce traffic.

Solo-drivers illegally using the Bus-VAO lane face a fine of €200, since it is designed to facilitate public buses and encourage commuters to car share.

However the practice of attempting to pass off dolls as passengers is said to have become increasingly commonplace in the capital.

A man was recently fined when it was discovered the tall-looking blonde bombshell riding next to him was infact a life-size blow up doll.