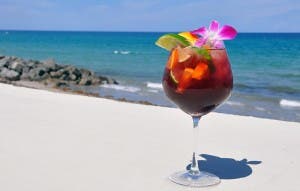 BRITS may put away a fair amount of sangria when on their holidays, but the country’s love affair with the drink goes back further than first thought.

In fact it has been revealed that Spain’s national tipple was invented by the British.

According to Father Esteban Torres’ 1788 dictionary British expats living in India were the creators of sangria.

Defined as a ‘drink invented by the English’ the word sangria reportedly originates from the old English word sangaree which was inspired by the word sangre (blood) because of its colour.