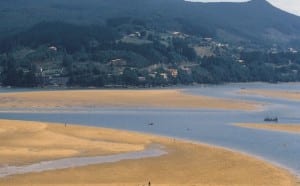 A MANHUNT is underway after a British au pair in her early 20’s was raped near a popular surfer beach in Spain.

The victim told police she was raped by a man who dragged her to a car park at Arrietara Beach, 11 miles from Bilbao, before he fled the scene.

A passerby alerted authorities after seeing the victim walking around disorientated.

She has been treated at a hospital.

The attack is alleged to have happened around 8am on Sunday.

A spokesman for the regional Ertzaintza police force said: “We are investigating reports of a sexual assault in a car park at Arrietara Beach.

“We were alerted by a call to the emergency services around 8am on Sunday.

“The caller had seen the woman wandering around the car park and felt something wasn’t right and decided to call police.”

No arrests have been made.