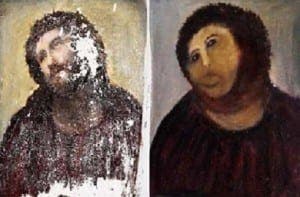 THE story of Spain’s infamous ‘botched fresco’ has been turned into an opera.

Now, three years and thousands of tourist visitors later, her tale of woe has inspired the Americans to immortalise the catastrophe in music and lyrics.

“It’s a hybrid, it has music from Bach, Gregorian chants, and then it has some numbers that sound like Lady Gaga or Frank Sinatra,” said Andrew Flack, the American playwright who wrote the opera along with composer Paul Fowler.

Mayor Eduardo Arilla Pablo says Borja has had 170,000 visitors since the incident, quite a boost for a town of just under 5,000 residents.

The opera will be interpreted by the local choir and professional singers from the region, and Flack and Fowler will start marketing it to US companies in September.

Gimenez will have a front-row seat at the show, to be held in the plaza next to the church where her restoration disaster is now on exhibition at around €2 per visitor.

“She sought therapy,” says Flack, who has travelled repeatedly to Borja to get to know the Gimenez family.

“This was a fresco in her local church that was dear to her and no-one was paying attention to it.

“When she began her ‘restoration’, there wasn’t a whole lot of fresco left. She was just trying to help out,” he adds.
“So when it went viral and she was made fun of, she felt terrible. Now she feels like it’s a miracle.”

FAB FRESCOS: Spain has some of the best, but how many do you recognise?