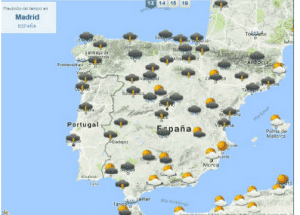 WHILE the UK basks in its Indian summer, 24 provinces in Spain have been placed on high alert for storms.

The country’s national weather agency Aemet has warned of thunderstorms, heavy rainfall, high seas and strong winds, bringing the end to a September heatwave that had seen this year’s summer prolonged.

Luckily for Andalucians, Ibizans and Mallorcans, they will be mostly left unaffected by the downpours as they are expected to remain sunny.

A cold front sweeping in from the west has ended September’s record-breaking run which saw temperatures in Sevilla reach above 50C.