DUBLIN criminal James Quinn has been arrested in connection to the murder of Gary Hutch on the Costa del Sol.

Quinn, 34, is the nephew of veteran Irish criminal Martin ‘The Viper’ Foley and is believed to have been working for the Kinahan cartel since 2009.

His arrest came during dawn raids at six properties along the Costa del Sol including at the MGM Marbella boxing gym where Daniel Kinahan manages a number of fighters.

The murder of Gary Hutch 12 months ago sparked a feud between the Kinahan and Hutch gangs, with nine murders taking place in Dublin, including the shooting of David Byrne at a MGM Marbella weigh-in.

Yesterday morning, Irish and Spanish police swooped on a number of properties, seizing €23,000 in cash, documents relating to money laundering, false identification and a number of weapons.

A yacht in Puerto Banus marina was also seized by police as well as a Bentley and a Mercedes.

One eyewitness who saw the raid at the gym told the Olive Press: “I saw around eight armed police officers go in with dogs.

“There was a lot of people coming in and out, it was scary to see it happen.

“The whole road was cordoned off.”

Meanwhile a Russian yacht owner in the marina added: “The raid took place fairly early, they had a young-looking guy cuffed and were bringing things off the boat and putting it into the police cars.

“It was fairly calm and over pretty quickly.”

Detective Supt Tony Howard of the Drugs and Organised Crime Bureau said that the investigation was heavily focused on money laundering.

“We’ve seized computers, phones, €23,000 in cash, false identification papers and financial documentation in relation to banks outside this jurisdiction,” Det Supt Howard said. “I believe we will have arrests in the future.”

He added that the operation was about evidence gathering and ‘disrupting and dismantling these organised crime groups’.

Quinn has around 70 convictions in Ireland. He is believed to have been living between Marbella and Benahavis.

Read the Olive Press in depth investigation into the most notorious gangs on the Costa del Sol. 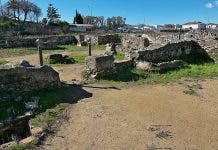