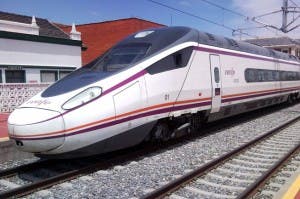 A SPANISH train driver cut short the journey of more than 100 passengers because his shift had ended.

The train was travelling from Spain’s north coast to Madrid but stopped some 300km away from its final destination in the village of Osorno at 9.15pm.

Still some two hours away from Madrid, confused passengers eventually discovered the driver was refusing to work overtime so had decided to put on the brakes.

It is reported he had requested a replacement numerous times but to no avail.

One passenger said: “They said the driver had decided to stop because he had finished his day’s work and didn’t want to risk an accident by working excessive hours.”

Passengers on the train, operated by Spanish state rail network Renfe, were told that a replacement bus service to the capital was on its way, however that failed to turn up until 11.30pm.

Renfe has since apologised, refunded all the passengers’ fares and launched an investigation.

A spokesman for the Semaf rail workers’ union described the case as “exceptional”, adding that the driver had asked for another driver to travel on board in order to replace him.

“They should have had a substitute driver lined up but it didn’t happen. We’ve seen similar things in the past,” said Semaf secretary Carlos Segura.