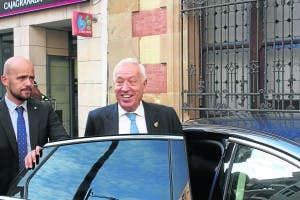 For the past two hours, he had regaled 250 Campo politicians and businessmen over beef and Navarra red. They had listened to – and occasionally applauded – his grand plan for Gibraltar.

The British Territory’s Chief Minister, Fabian Picardo, and some 100 Gibraltarian politicos and organisations who were also sent invitations to lunch had declined. They would have choked on it.

Now it was time for the PP minister to return to Madrid … and one last question.

“Mr Margallo, why are you persisting with a plan that so clearly won’t have the consent of the UK government or the Gibraltarian people?” I asked the departing figure as a phalanx of officials ushered me aside.

“Joint sovereignty will come with the consent of the Gibraltarian people,” he answered.

“But they aren’t going to give their consent?”, I suggested.

“I think that will come,” he replied before disappearing behind a darkened car window. The words carried more than a hint of menace. 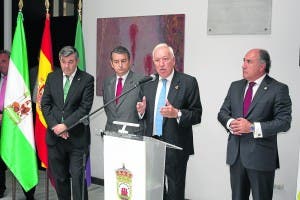 Welcome to the new Margallo. Same as the old Margallo. Gibraltar’s public enemy number one blew into Algeciras last Tuesday on a gust of hard-nosed plans and diplomatic bonhomie.

Fired up by the Brexit Leave vote, this was the day Margallo planned to outline his scheme for joint sovereignty over Gibraltar to Andalucia’s movers and shakers.

It was supposed to signal the start of a more conciliatory approach from the controversial politician. In truth, it was more of the same.

First up was an Algeciras Town Hall reception, where the city’s mayor – and Margallo supporter – José Ignacio Landaluce warmly embraced his fellow PP representative, Inside the Town Hall’s ornate chamber, Margallo signed the book of honour. Landaluce pinned the city’s insignia onto Margallo’s lapel. In return, Margallo presented a copy of his 2015 political book All The Clouds Fly To Spain: Letters From An Aeroplane.

He was soon outlining his vision of post-Brexit, cross-border relations.

“Nothing is going to be the same because the UK leaving means Gibraltar has to leave too,” he said.

“This is going to cause economic commotion for ‘the colony’ (sic) and it’s an historic opportunity for the Campo de Gibraltar. 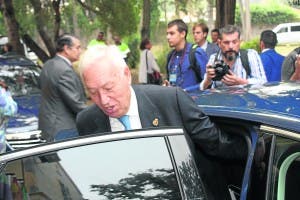 Margallo went on to speak about wishing to preserve the Rock’s wealth. But, of course, this is a man who has also expressed a wish to plant Spain’s flag on the Rock. So when Margallo issues fine words about having Gibraltar’s best intentions at heart, Gibraltarians are understandably, sceptical. At best.

Margallo’s three-pronged assault on the Campo de Gibraltar’s political class next took him the short drive to the Mancomunidad de Municipios, which represents the Campo’s seven municipalities.

The media scrum circling the press conference lectern had a long wait. Inside, Margallo was hammering out his ideas to Campo politicians during his first visit to the area since taking office. After an hour and 45 minutes, he finally reappeared and addressed the press corps.

“We are at an historic change,” he announced. “One of those changes that come along very few times in history. From this moment, nothing is going to be the same.

“And yet, in some minds there exists the illusion that because the UK is leaving the EU, the Gibraltar ‘colony’ can maintain the same status it has now, where the citizens of Gibraltar can be British citizens while enjoying the benefits of belonging to the EU.

“But that can’t be, and is impossible.”

Margallo went on to describe the four ‘pillars’ of his plan.

“Joint sovereignty between Spain and the UK,” he continued.

“We have to resolve the problem of the Gibraltar military base. Thirdly, Gibraltarians to have joint British and Spanish nationality, a privilege that only they would have. Autonomous government as outlined in the Spanish constitution.”

When asked by GBC’s Jonathan Scott what he would do once Gibraltarians rejected his ‘deal’, Margallo was unequivocal.

“There are automatic consequences,” he intoned. “Gibraltar becomes a third party to the European Union. Therefore the frontier becomes an external frontier of the EU.

“Gibraltar will be outside the single market. The four freedoms will cease to apply. That’s exactly what the EU treaty says: it’s not what we say we will do, it’s what will happen.”
I then posed another question. “The UK government has told you very clearly that Gibraltar will stay British,” I say to him. “Why do you think they are going to change their position now?”

“The jurisprudence of the court of European justice says Gibraltar is a colony that doesn’t form part of the UK,” a clearly riled Margallo rapped back.

“What we are trying to do is search for a formula that allows Gibraltarians to continue being part of the EU without losing their idiosyncrasies.”

Over lunch at Guadacorte Park, Margallo affected statesmanlike pomp, quoting Churchill and welcoming the gathered throng. But the mask slipped as he took a series of questions submitted in writing by the lunch guests. Among them, was one on the Gibraltar national football team.

“We have done everything to stop Gibraltar having a national team, and every time they play we do everything to ensure it has the least impact possible,” he said, before shrugging his shoulders and flashing a smile at the audience.

Football will always bring out a crowd’s partisan nature. But what Margallo has outlined is deadly serious. And it has to be asked if UK politicians really appreciate the gravity of what Margallo is proposing for Gibraltar.

Gibraltar will have to learn to adapt to ‘uncomfortable’ post-Brexit reality, says Picardo