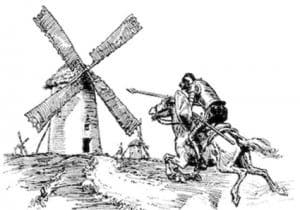 SPAIN’S most-famous literary character Don Quixote was based on the mad son of a Spanish nobleman, new research has suggested.

Some 400 years after famed author Miguel de Cervantes’s death, researcher Javier Escudero claims to have found the inspiration for the writer’s leading character.

Escudero believes that the titular character was in fact based on the son of a nobleman called Augustin Ortiz who was tried for attacking a windmill.

During Cervantes’s two-volume masterpiece, Don Quixote spends much of the novel tilting at windmills he believes are imaginary enemies.

After two years of research, Escudero discovered that Ortiz was arrested after he cut wooden cross into a windmill with his sword in 1594.

A former surgeon, Ortiz lived in the village of El Toboso in Castilla la Mancha, where Don Quixote is set.

Ortiz’s father is also a knight – like Don Quixote – and he allegedly was close friends with Cervantes’s uncle.

Scholars have long thought that Don Quixote was inspired by a culmination of people but Escudero is the first researcher to find a clear link.