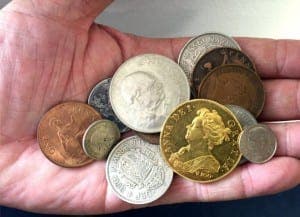 AN 18th-century gold coin seized from Spanish treasure ships has been discovered in a child’s toy treasure collection.

Worth up to €300,000, the rare Queen Anne Vigo five guinea piece was given to an anonymous owner by his grandfather some 30 years ago.

The British man only discovered the true value of the treasure when experts told him it was one of 20 made from gold seized from Spanish ships in Vigo Bay in 1702.

“My grandad travelled all over the world during his working life and collected many coins from the various countries he had been to,” the man from Essex said.

“He gave me bags of coins to play with throughout my early years because I was into pirate treasure.

“As time passed, these coins went back into bags and boxes and were forgotten about, until I rediscovered them after my grandad passed away.”

Gregory Tong of Boningtons auctioneers, in Chelmsford, instantly recognised its value as one of fewer than 15 known examples.

It will go under the hammer at auction next month.