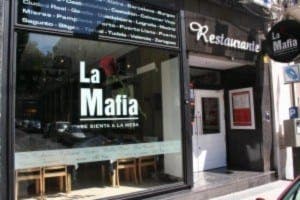 Following protests on the streets, the country lodged a successful formal complaint with the Office for Harmonisation in the European Internal Market (OHIM), claiming the title is ‘offensive and inappropriate’.

OHIM has ruled in favour of Italy, forbidding the franchise to use the ‘La Mafia’ name outside of Spain.

The company has appealed to the OHIM’s board of appeal, and says it is willing to take the case all the way to the European Court of Justice.

The chain, which has 41 locations across Spain, defended their use of the name, saying it is a nod to the film franchise The Godfather.

“In no way is it intended to promote or justify criminal or violent organisations,” it said.

Awaiting the appeal’s outcome, the president of the Anti-Mafia Commission in Italy, Rosy Bindi, celebrated the European decision, saying it is important not to allow ‘normalisation of the term’. He said that its use affects the international prestige of Italian gastronomy.

“Italian food, which is excellent, can not be related to the mark of the mafia. We must end it,” he said.

Coldiretti, an association of Italian agricultural producers, has spent years fighting against the use of the word “mafia” in local products in a bid to ditch the stereotype that has plagued the country for years.