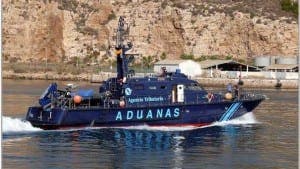 A GANG of drug traffickers were killed after their boat collided with an Agencia Tributaria patrol boat.

An investigation is now underway after four men lost their lives following a ‘freak accident’ in the Strait of Gibraltar.

The boats reportedly collided 11 miles from Punta Europa, Algeciras, when the traffickers performed an ‘abrupt maneuver’ after being pursued by the Agencia Tributaria officials.

All four men – three Spaniards and one Moroccan man – were thrown overboard following the collision.

When their bodies were pulled aboard the tax authorities’ vessel, all four men were already dead.

It is believed that the men transported large amounts of marijuana from Morocco to the port of Algeciras.

Cadiz deputy leader Javier Torre confirmed a ‘full and comprehensive’ investigation would now be launched into the incident.

“I have the deepest condolences for the families of the four people who have died in this accident,” Torre said. “It is a loss that highlights the dangers and the problems of drug trafficking networks operating in the Strait of Gibraltar.

“We must continue to work hard in our fight against drug trafficking.”

The five crew members aboard the Agencia Tributaria boat were all treated for minor injuries.