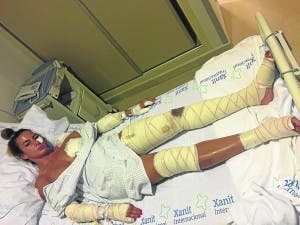 AN angry expat has launched an appeal for witnesses after his wife was seriously injured in a hit-and-run.

Professional cage fighter Christian Holley, 28, is trying to track down the driver who knocked his wife, Zamara Rodriguez, off her scooter at 100kmh, near Benalmadena.

The 27-year-old bodybuilder, from Marbella, was sent skidding across a busy A7.

“She went flying through the green posts by the turn off,” Holley, from Manchester, told the Olive Press. 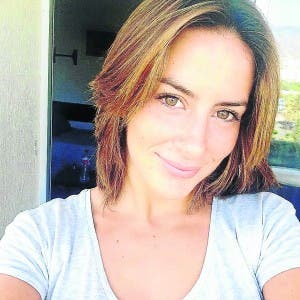 “Witnesses who pulled over to help her said it was an old grey BMW, but the road cameras can’t see the registration number because they said the accident was ‘too far away’. We need to find this person and get justice.”

The stunning ‘bikini fitness’ model has had to have an operation on her face and has broken her elbow.

Her partner, who fights by the name Christian ‘the Animal’ Holley, continued: “She had burns on 35% of her body from scraping along the road for 20 yards.

“We’re lucky she wasn’t run over by another car.”

The incident happened near the Arroyo de la Miel turn off on the A7.

“Police are trying to find the driver, and we have already had a couple of people contact us through a post of Facebook which has had over 2,000 shares,” added Holley. 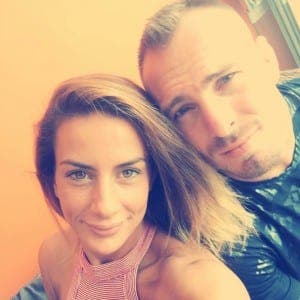 Rodriguez, who has two children with Holley, is back home and recovering but is having to revisit the hospital for treatment.

The scarring is said to have affected her psychologically and she is trying to build up the courage to return to work.