After revealing that a Hollywood stuntman had been conned out of thousands in a bogus €5 million film deal, countless Olive Press readers come to us with tales about notorious Marbella-based figure Jan Herman Brinkman. Linked to a string of property and investment scams, the Olive Press investigation has been followed up by TV documentaries in Brinkman’s hometown

Since Irish expat Amy Fitzpatrick went missing on New Year’s Day 2008 the Olive Press has been at the forefront of the investigations. An Amy special edition in 2009 revealed the squalid life that she was living in Mijas. Since then we have repeatedly kept Amy’s disappearance in the news and just last year published Jon Clarke featured on a documentary in Ireland made by Donal MacIntyre

Catch me if you can

On the back of catching most wanted paedophile Matthew Sammon, the Olive Press went on the hunt of fellow most wanted fugitive Mark Acklom. Tracing his wife to a business address in Murcia we published an expose on his luxury life in Spain last issue and then this week we have tied Acklom to scams on the Costa del Sol

All that glitters is not Goldman

To hardy Olive Press readers, Nigel Goldman will be a familiar figure. Exposing naughty Nige countless times for a string of scams including selling gold coins and stamps on eBay Goldman was finally handed a 12-month suspended sentence in January. He still has many cases to answer for, with countless victims baying for his head in Spain

The CEO of organised crime and the bent mayor

Recently labeled as a mini-Gurtel, the Olive Press has covered the ongoing Majestic case long before it reached the courts. As details emerged of the Eastern European gangsters behind the Casares property scam, the Olive Press revealed all about ‘Polish Al Capone’ mob boss Ricardo Fanchini and his cohorts, Armenians Robert Mani and Robert Gaspar

The blonde and the bald

Since Agnese Klavina disappeared in September 2014, the Olive Press has been pressing hard for answers. We were the first ones to link privately-educated Brit Westley Capper to her disappearance, picturing him in Aqwa Mist nightclub in our November 2014 edition. Since then Capper has admitted to killing a Bolivian mother in a hit-and-run incident, but, as revealed by the Olive Press is now back at his luxury Marbella mansion having been granted bail

Tracked down to a maintain lair in Ronda, the Olive Press exposed the timeshare-style cons conducted by infamous fraudsters Stephen Lawrence and Toni Muldoon and their Costa del Sol cronies way back in 2008. Put away in 2014 for running a bogus escort service Muldoon was one of the first Costa conmen to come under the OP spotlight

When Scottish mum Lisa Brown went missing in November 2015, it was the Olive Press who exposed Simon Corner’s shady dealings on the coast. We were the first paper to picture Corner, reveal how he uses various aliases and link him to convicted people smuggler Stephen Jackson. While Jackson lingers in a UK prison awaiting questioning, Corner is no better as he waits to hear his fate from Algeciras prison.

The Olive Press has been investigating boiler rooms in Spain from day one. In 2011 we revealed that blacklisted British businessman Terry Wright had earned millions of euros by persuading unsuspecting investors to part with their hard-earned cash. The following year Wright bolted and bought a huge French chateau with his ill-gotten gains. 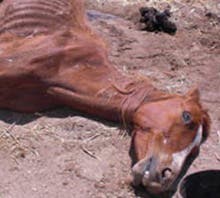 Animal rights has long been at the forefront of the Olive Press mindset. In August 2008, we exposed a British woman for starving 16 horses and being responsible for the deaths of 26 more. More recently, in , we ran an Animal Rights special featuring articles as well as carrying out an investigation into Triple A animal sanctuary following police raids