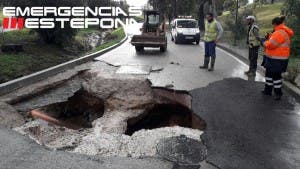 A DEAD cat stuck in a pipe has caused a flood at an Estepona brothel.

Firefighters were forced to drill through the road near to Alcazaba Golf after the call house began flooding in the early hours of the morning.

Disappointed punters were forced out onto the streets as the establishment was forced to call in authorities.

After two and a half hours working in the rain, firefighters pulled the dead moggie from the pipe.

The road has now been closed, while workmen begin tarmacking the area.