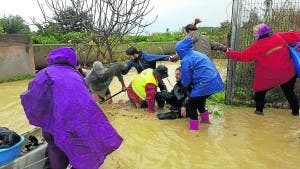 DEATH and destruction swept the Costa del Sol after almost a week of relentless rain.

At least two people died, while hundreds more were forced to abandon their homes in floods of biblical proportions.

Many homes were left without electricity as emergency centres were set up and the mass clean up operation got underway in dozens of towns.

In the worst storms seen in Andalucia in quarter of a century, it is estimated that up to 300 litres of rain per square metre fell across the region in 72 hours.

In total, it is going to cost the Junta a staggering €4 million to cover the damage to streets alone.

Much of this came from landslides, while walls and bridges collapsed in some areas, leading to cars becoming trapped.

Mud, rocks and dirt turned many streets into an apocalypse-esque disaster zone.

Incredibly 103 litres of rain per square metre fell in just two hours in Mijas and Fuengirola, causing more than 100 landslides along the Mijas-Alhaurin road as the entire Costa del Sol was put on ‘red alert’.

British expat David Blinder told the Olive Press that he has ‘never been more scared’ as he was forced to swerve between debris falling from the cliffs on either side of the Mijas-Alhaurin road. 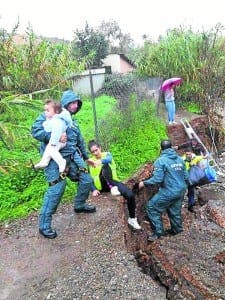 “It was the scariest drive I have ever done,” he said.“At least three quarters of the road was blocked and more landslides were falling as I was driving along.”

Despite a dramatic rescue attempt by scuba divers a 26-year-old prostitute drowned in a basement brothel in Estepona.

Meanwhile an electrician lost his life in La Linea after heading out to repair damaged lines, only to become trapped in his van as the floods rose around him.

Washed out cars abandoned at the height of the storm on Sunday morning still littered the streets, as further downpours continued on Monday. Many were completely submerged with their electrics badly affected.

The finger has now pointed to the cause of the flooding, with many blaming a lack of planning to clear river beds, construction on floodplains and little emergency cover on Sunday night.

A week earlier, one British expat in Fuengirola contacted the Olive Press to complain about the lack of preparation work with water levels already ‘dangerously high’ in the town’s main river.

He said: “The river mouth leading out into the sea has not been cleared all week despite the heavy rain. 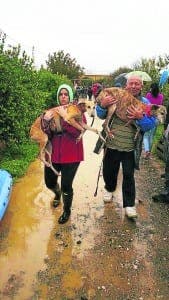 “The water levels are already very high and if nothing is done the town will be under water.”

Tragically his prediction was eerily accurate as roads were cut off and houses flooded in Fuengirola.

And it was a similar story along the coast.

In Los Barrios a bridge collapsed, crushing three parked cars, while Gibraltar had 157% of its average December rainfall in 48 hours.

Meanwhile, almost every home in popular Casares Marina urbanisation saw around a metre of water flood in.

Nearby in Manilva, Dutch-run Floria beach bar was all but destroyed as high winds battered the wooden structure.

In Sabinillas the A-7 underpass was left completely flooded, while ground floor homes and businesses were left in ruins on either side of the motorway. An emergency centre was set up in the town hall for flood victims after it was declared a disaster zone.

Duquesa port saw a raging torrent flow right through it.

In neighbouring Estepona the port was flooded and pretty much all frontline bars and restaurants shut up shop and spent the day bailing water.

In Cartama, Jackie Minion, from Reading, was left devastated after her horse Ronnie vanished when his stables were engulfed in floodwater.

Meanwhile, horses were forced to wade through the floods in San Pedro after a similar animal sanctuary was engulfed in water.

At least, she managed to keep her sense of humour by wearing a Wonder Woman outfit to clear up the mess the following day.

Scottish expat Kayleigh Smith meanwhile, was among a group of 20 drivers forced to reverse down the A-7 into oncoming traffic after floods cut off the road. 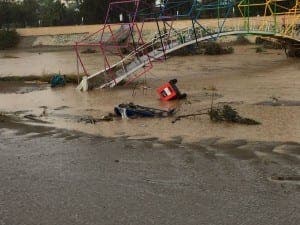 With cars already abandoned, Smith had to head 100 metres back the way they she came as a ‘small lake’ formed on the A-7 near to Selwo zoo in Estepona.

“It was terrible,” she told the Olive Press. “I had to give up trying to get to work as the A-7 was completely flooded and cars were already trapped in the rain.

Helicopters had to be called in in Cartama to rescue a driver and his pet dog from the roof of their car as the waters rose around them. And with more rainy days forecast for the rest of the month, more floods could – unfortunately – be on their way.