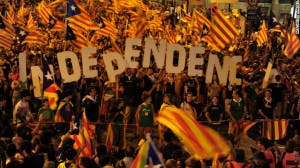 THREE Spaniards have been arrested after they failed to show in court after burning photos of King Philip V.

They have been supported by several Catalan politicians from the CUP who tore up photos of the current King Felipe VI during a press conference held following the arrests.

“We vindicate disobedience as a valid mechanism for the construction of the Catalan Republic […] we don´t have fear or a king,” said Mireia Vehí, a CUP member of the Catalan parliament, during the press conference in which she and five others tore pictures of Felipe VI to bits.

While the CUP makes up a small fraction of the Catalan Parliament, they have recently joined forces with a center-right separatist coalition in a bid to achieve independence for the region.

Spain is currently investigating important separatist politicians after they held a non-binding referendum on the issue in 2014.