Dramatic vistas in the sierras de Ronda, Cadiz and Almeria are all being eyed up by the famed director, who has just visited the region.

Scott took to the skies in a helicopter to find areas with a turn of the century Mexican look that can provide the backdrop for his new film Wraiths of the Broken Land. 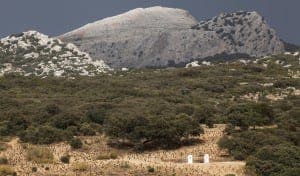 An adaptation of the 2013 book by US author S. Craig Zahler, it follows the tale of two brothers who attempt to rescue their two sisters forced into prostitution by an outlaw gang.

At the end of a few long days of searching, Scott took time out with his team at Restaurante José Carlos García in Malaga, where he met the Michelin-starred talent.

“We recognized him, but we didn’t want to approach and disturb him”, said Carlos.

“But a wine he ordered was not to his taste, so I brought him a new one and we got talking.”

After visiting Andalucia, Scott flew to Madrid, where he is also considering filming some scenes.