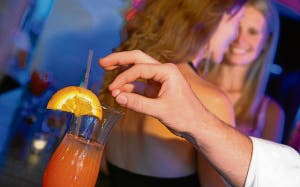 The scheme takes blood, hair and urine sample from victims in a bid to detect substances like Burundanga, which causes ‘chemical submissions’.

The drug affects the nervous system and can reduce free will before knocking the victim out for up to 24 hours.

The new scheme comes after two Olive Press reports last year, which some labelled as ‘alarmist’, warned of a rise in attacks.

The Institute of Legal Medicine has now revealed that 2016 saw a 35% increase in sexual assaults in Malaga alone.

During New Year’s, a 19-year-old British woman was drugged and sexually assaulted in Marbella while a 20-year-old foreign girl was recently raped on a patch of waste ground in Estepona.

The scheme’s main focus is on sexual assault, but police have also noted an increase in the use of the drug in robberies and other crimes.

The new protocol is the result of collaboration between police, legal and health authorities, and is one of the first of its kind in Spain.

Have you seen him? Police hunt Brit fugitive thought to be on the run in Spain’s Marbella in new appeal for ‘most wanted’