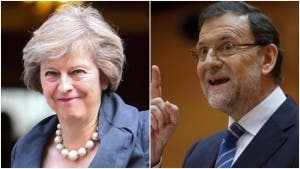 THERESA MAY has edged closer to a deal that would guarantee the rights of British expats living in Spain.

In a meeting with the Spanish prime minister Mariano Rajoy this morning, Rajoy said he wanted an ‘early agreement’ on the issue.

The pair discussed the issue during an informal 25-minute meeting at an EU summit in the Maltese capital Valetta.

Mrs May has refused to confirm that some 3.2 million EU nationals can stay after March 2019 until she has the same guarantee for the 1.2 million Britons living in other EU countries.

Spain has the highest number of British expats, with at least 309,000 living there, although that figure could be much higher as many do not officially register.

A Downing Street spokesman said: “They discussed reciprocal rights and both agreed it was an area it would be good to get an early agreement on.”

During their talks this morning, Mrs May and Mr Rajoy “agreed that it was important to think about the future relationship as well as the detailed exit arrangement, so that we can give greater certainty for people and businesses who want to live and work in each other’s countries”, No10 added.