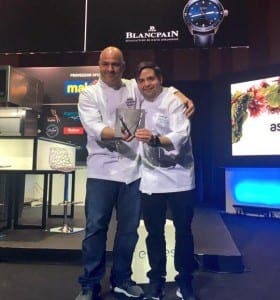 The 39-year-old Jerezano wowed judges with his ‘edible light’ project, an investigation into the possibility of using light from luminous sea life to create glow-in-the-dark dishes.

So far he has succeeded in creating radiant risotto and incandescent cocktails by farming and pulverising plankton.

The study is part of Leon’s wider attempt to reduce the environmental impact of fishing by cooking with seafood lower down on the food chain, for which he was also commended.

To win the prize, he beat off stiff competition from almost 100 other chefs from 15 nationalities.

“It’s been a magical day,” said Leon, commenting on the prize.
“To receive the award for the best chef in Europe is a sign of approval for those who struggle for sustainability,” he added.

Michelin-Starred chef wins gong for exporting Cadiz around the globe

Budding Malaga chef cooks up a storm at Madrid Fusion