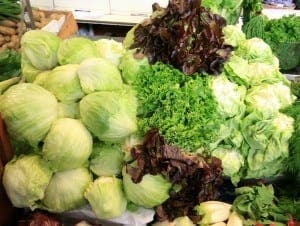 VEGETABLE producers in Spain have criticised the British press over its coverage of the salad shortage.

Several articles in the British media accused Spanish producers of storing the vegetables in Spain in order to sell them later at an increased price.

Fernando Gomez, head of the Association of Fruit and Vegetable Producers and Exporters of Murcia (Proexport), has hit back at this criticism, labelling it ‘totally false’.

He drew attention to numerous photographs of empty shelves in British supermarkets compared with those in Spain overflowing with lettuce.

Gomez pointed out that the British shelves were marked with a ‘shameful’ €0.59 price tag, while in Spain the same product was on sale for €1.15.

“If they don’t have lettuces it’s because they don’t want to buy them” he said, calling the low British price ‘shameful.’

He then exclaimed that Spanish growers could not be ‘secretly storing’ lettuces, as they are a perishable good and don’t last in storage.

According to Gomez, the ‘aggressive’ pricing of British supermarkets is to blame for the shortage, not Spanish producers.

Kirsty Mckenzie - 18 Apr, 2021 @ 15:45
A three star LGTBQ hotel in Torremolinos is being put up for sale by its current owners. The Ritual Torremolinos Hotel, located in La Nogalera, is...