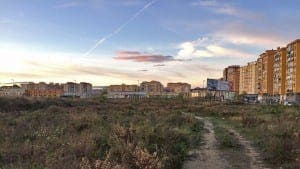 NATURE lovers in Malaga are backing a campaign for an urban ‘forest’ park on a former toxic site.

They object to the current potential plan lodged with the city council to use 100,000m2 of the land between Avenidas Europa and Juan XXIII to house four new skyscrapers for homes and offices.

Hundreds of campaigners staged a cycling ride through the city on February 11 in support of the proposal for the site, which has lain abandoned for decades.

They want the land to be grassed over and planted with thousands of trees native to the Costa del Sol.

They would also like it to include bicycle and walking paths.

“Málaga City Council  should commit to not further increasing neighbourhoods with housing to instead provide the city with a real urban forest that places Malaga in the line with other great European capitals,” said a spokesperson for the campaign.

A huge study is currently taking place on the site due to fears it could still be contaminated.

It was used by Repsol to store petrol in the 1970s.