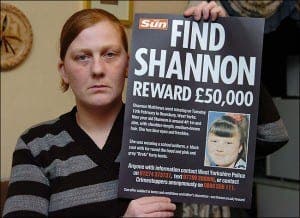 Karen Matthews, 41, is said to be fearing for her life following a backlash as a result of the recent BBC drama The Moorside.

The two-part series, starring Sheridan Smith, documented how Matthews staged her daughter Shannon’s kidnapping with the aim of collecting a €60,000 reward.

It comes after the mother-of-seven, who was jailed for eight years in 2009, had a pot of steaming mushy peas dumped on her head as she left a fish and chips shop last week.

Sources close to Matthews say she has now applied for a passport and is interested in taking a cleaning job on the Costa Blanca.

The source told the Daily Star: “She knows she can never avoid her past. With this programme on the telly she’s realised living abroad might be a better option for her.”

Matthews, from Dewsbury, allowed Yorkshire police to launch their biggest ever manhunt, costing almost €5 million, all the while knowing her daughter was safe and sound just a couple of miles away in her uncle Michael Donovan’s flat.

Her distressed friends organised search parties for almost a month.

She became known as Britain’s most-hated mum when her plot was unraveled by friends and police.

Although she was sentenced for eight years, she only served four.

Donovan, 48, was also sentenced for eight years but got released a few weeks before Matthews.

INTERVIEW: Ex-Met detective Peter Bleksley shares insights into manhunt for Kevin Parle, the UK’s most wanted fugitive believed to be hiding out on Spain’s...

Meet the team: Alex Trelinski, our man on the Costa Blanca