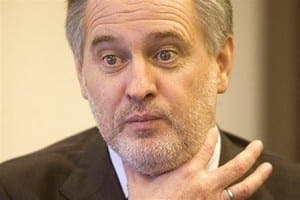 AN eastern European oligarch suspected of laundering money through property in Spain has been detained on a European arrest warrant.

It comes after the shock decision by a Vienna court to grant a request to extradite Dmitry Firtash – one of Ukraine’s richest and most powerful men – to the US to face bribery charges.

Spain was also granted a European arrest warrant and Firtash was picked up by Austrian police shortly after.

The court will now have to decide between the US and Spanish requests.

Firtash is thought to have served as a leader of a money laundering ring in Catalonia, where he is suspected of laundering at least €10 million through property deals as well as restaurant businesses.

He is said to have reacted with ‘silent horror’ as the Austrian court, filled with his family and associates, read out its ruling.

The developments are a dramatic setback for Firtash, whose business and political relationships stretch from the top echelons of Russia and Ukraine to close associates of US President Donald Trump – he had pursued property dealings with Trump’s previous campaign manager Paul Manafort.