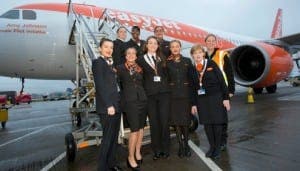 AN ALL-FEMALE crew operated an easyJet flight from London Gatwick to Madrid this morning.

The aircraft itself was even named after a woman – female aviator Amy Johnson.

Captain McWilliams said: “International Women’s Day is a global day celebrating the achievements of women so we thought this all female flight would be a very fitting way to celebrate the achievements of the many women working in the aviation industry.”

There were also several female ground staff involved in tasks including boarding and guiding the aircraft away from the stand.

Women have been involved in the aviation industry from the early 20th century, with the first woman flying an airplane solo only five years after the Wright Brothers.

Then of course there was the icon Amelia Earhart who, along with Amy Johnson paved the way for female pilots.

Although the number of female pilots has increased, the ratio between male and female is hugely imbalanced, with only 3% falling into the latter category.