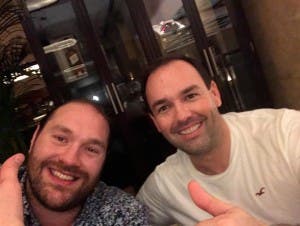 Fury, who ‘retired’ from boxing after failing a drugs test administered by the Voluntary Anti-Doping Association, posted a picture of him and his pal on Twitter last night.

The boxer, who said he would return to the ring this year, has reportedly been hanging out with Kinahan.

Kinahan is currently under threat from rival gangs due to the Kinahan/Hutch feud.

He set up the MGM gym in Marbella with former boxer Matthew Macklin four years ago.

Following a gym raid by police in September and a legal battle with the MGM grand casino in Las Vegas, it has been renamed MTK – Mack the Knife.

Twitter users blasted Fury’s weight in the picture, telling him to ‘get down the gym’.

“Look at the size of it!” One user wrote.