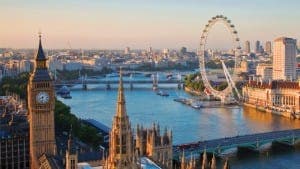 THE UK has been voted the third best country in the world while Spain has fallen three places.

The annual survey by US News & World Report, Y&R’s BAV Consulting and the Wharton School of the University of Pennsylvania places the UK at the coveted third spot under Canada and Switzerland.

The UK has remained in the same position as last year, despite the political drama of Brexit.

However Spain has fallen to number 19 in the survey, which includes nine subcategories including Cultural Influence and Power.

The UK obtained its highest score in the Entrepreneurship category – number four out of all 80 countries in the rankings, whereas for quality of life, it came 12th, let down by its affordability.

Spain won second place after Italy in the Heritage category thanks to its cultural attractions, food and rich history.

Last place went to Latvia, which was ranked for the first time on this list.

The survey spoke to more than 21,000 people across 36 countries in the weeks following the US presidential election.

Jorge Hinojosa - 19 Aug, 2022 @ 15:45
FIREFIGHTERS are continuing to battle to control 12 twelve different wildfires raging across Spain on Friday, as a drop  in temperatures brought little reprieve. It...