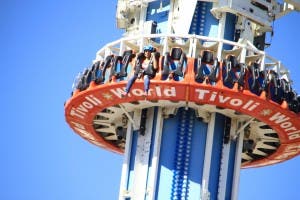 ONE of the Costa del Sol’s most iconic amusement parks is to receive a €300 million makeover.

Tivoli World, in Benalmadena, will be completely modernised while adjoining land will be developed into a commerical and leisure centre.

Madrid-based firm Tremon plans to build a complex covering more than 152,000 square metres on the east side of the park, along with gardens and a 2,000-space car park.

Hypermarkets, a cinema, concert hall, office blocks and a hotel will all feature in the project.

Upgrades in the park itself would see the addition of 43 new attractions.

These would include a mini Formula 1 circuit, an Everest expedition attraction and an area for extreme stunts demonstrations.

The town hall would gain a significant cash injection from planning permission fees and taxes, while the creation of jobs – 1,600 for construction and 3,300 after completion – and a boost to tourist numbers could revive the Arroyo area.

The project is expected to take two years to complete.

But it cannot go forward until a legal dispute is settled between the park’s previous owner Rafael Gomez and current owners Tremon.

Gomez, who is serving five years for tax offences, claimed the original sale of the park to Tremon in 2007 was never fully completed and took the company to court.

It led to an unusual arrangement whereby Tivoli World is in the name of Tremon but under the management of one of Gomez’s companies.

Tremon has said it will push ahead with its project as soon as the dispute is settled.