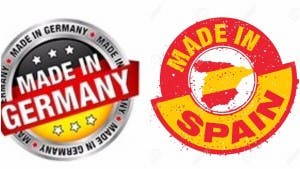 THE ‘Made in Germany’ label is the most respected in the world.

According to the annual Made in Country Index, which ranks how products made in different countries are viewed, goods made in Germany are the most trusted.

The ‘Made in Country’ label was first introduced by the UK 130 years ago in a bid to protects its good from German imitations.

But the tables seem to have turned, with goods labelled ‘Made in UK’ coming in fourth on the index.

The UK brand was also beaten by ‘Made in the EU’, which came third, scoring highly in the categories of quality and technology.

The EU classification was only introduced by the European Commission in 2003, but has already won much respect and status around the world.

The survey, carried out by Statista, spoke to 40,000 global consumers.

German goods were associated with quality and safety, and were ranked number one by 13 countries, including Spain.

Spain came in at 20th on the list, with its products being especially appreciated in Latin America, North Africa and the Middle East.

The goods are seen as being good value for money, having good quality and design.

Second place went to Switzerland after it scored highly in status and authenticity.