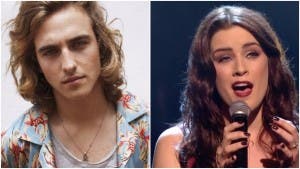 MANEL Navarro has revealed that he sees the UK’s Lucie Jones as his biggest competition for this weekend’s Eurovision.

The Spanish hopeful will sing Do It For Your Lover during Saturday’s live final against Jones, who won over the UK voting public in this year’s You Decide show.

“I think my biggest competition is England because Lucie is awesome,” the 21-year-old told The Sun.

“She has a very beautiful voice and a really good song. I think she is one of the best contestants.”

Navarro will battle 40 other hopefuls in Kiev, Ukraine, on Saturday night.

The singer became one of the most controversial contestants of this year after coming third in the public vote but still being chosen to represent Spain.

His selection came after the nominations point system saw him draw with fellow hopeful Mirela before it went to a jury vote.

His victory was met with boos from the studio supporters.