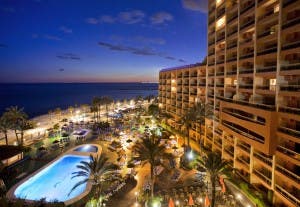 A LEADING Costa del Sol hotel is to celebrate its 30th anniversary by attempting to raise €12,000 for three children’s charities.

One of the biggest hotels on the coast, the Sunset Beach Club, in Benalmadena will be supporting DEBRA Spain, Barretstown Ireland and Make a Wish Spain.

Taking place on May 26, guests will enjoy live performances from celebrated cabaret singer Ricky Lavazza, who does a number of tribute acts for stars including Robbie Williams, Freddie Mercury and Michael Buble.
He will be joined by Adele impersonator Nikki Rae, 27.

Hotel manager Mark Wardell said: “We are really hoping to reach this record target in our crucial anniversary year. That will be no mean feat.”