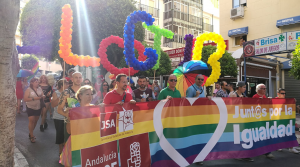 The massive figure is a 30% increase on last year.

Thanks to the spike in visitors, commercial activity in the town increased by 14% while hotel occupancy rates reached nearly 100%.

Councillor Aida Blanes said the event demonstrated a ‘a celebration of integration, coexistence between people who are lesbian, gay, transsexual, bisexual and intersexual.’

The Pride March this year beat records both in terms of floats and people.

Some 9,000 LGBTQI individuals and their allies marched through the streets on the Saturday.

Bar owner Paolo Molleda told the Olive Press: “There were so many people in the parade it was great to see.

“The event is growing and growing each year and in these times it is more important than ever.”