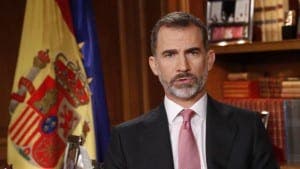 While addressing parliament on the 40th anniversary of Spain’s first elections, the Spanish monarch said the vote will only ‘negate freedom’.

Felipe said: “No path taken in our democracy should lead to the breakdown of our coexistence… or to a path that divides Spaniards and breaks the fraternal spirit which unites us all.

“Disagreements and differences can be resolved through dialogue and debate.”

He added that the vote, scheduled for October 1, would only bring insecurity and lead to the ‘negation of freedom’.