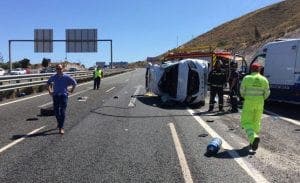 A GUARDIA Civil officer who caused a fatal pileup last week allegedly tried to flee the scene before blaming the crash on another officer.

Two Cadiz GRECO cops captured the officer after he run across the adjacent five lines of traffic and into a field.

After being arrested, he claimed the car was driven by another agent, but that he did not know where he had escaped to.

The crash killed three people and severely injured four others on the AP-7 in Torremolinos.

Sergeant Miguel Polilla walked away from the accident and the victims who laid still on the road until someone shouted “Stop, police!”

After him were two national police of the Special Response Group for Organized Crime (GRECO) of Cadiz who happened to have been circulating around the area.

Miguel jumped the central van of the highway and crossed the five opposing lanes of the MA-20, almost causing another crash as cars slammed the brakes to avoid hitting him as they travelled towards Malaga.

He ignored the police warnings and heavy traffic and continued into an adjacent field, but he was soon caught by the two fellow cops.

Back at the scene he reportedly said: “I’m a partner,” before he identified himself as a Guardia Civil sergeant and claimed that he was not driving the Hyundai that had caused the tragedy.

Visibly drunk, he then scolded the policemen, stating that he was in the passenger’s seat and that another officer of the armed institute was behind the wheel.

Inspection of the vehicle and the testimony of some witnesses showed that he was lying, but the agents were obliged to transfer the sergeant’s version to the first civil traffic guards who appeared at the site of the accident.