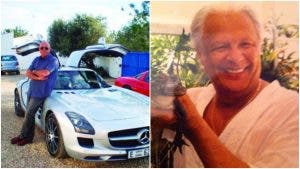 AN American expat is demanding justice after having his cars taken off him for more than three years.

Dennis Fitzsimmons, 79, has been unable to drive his red Corvette and Grand Cherokee Jeep since 2014 after the British-owned company that imported them from New York came under investigation.

When police uncovered potential criminal dealings at the now defunct company Import Spain – owned by Briton Chris Dann and exposed by the Olive Press last year – they decided to impound the vehicles of 97 customers.

“They told me they were investigating Dann for not paying the proper taxes on cars before selling them, and that every customer was having their car embargoed,” Fitzsimmons, based in Zaragoza, told the Olive Press.

“And now his lawyer tells me that the case has been extended by 18 months, which means it will have been five years before a trial even begins, it’s crazy!”

Former doctor Fitzsimmons, who has so far paid out more than €10,000 on legal and car rental costs, added: “I just want to see something done and some sort of justice served.

“But most of all, I just want my damn cars back.”

Dann insisted this week that it had nothing to do with him.

The Brit, who set up the company in Barcelona in 1990, said: “It was a very bad time that I would not like to revisit or go over,” he said.

“I don’t know what to say, It has nothing to do with me, I did nothing wrong, the charges were dropped over two years ago.”

His lawyer, David Pique, however, confirmed that Dann remains under investigation and that a trial will begin in 18 months time.