A BRITISH teenager celebrating the end of his A-levels in Spain has died after collapsing at a rave.

Alex Masterton, from East Lindsey in Lincolnshire, dropped to the ground at an Elrow club event near Barcelona on Saturday.

The young student had travelled to Salou with a group of friends and is understood to have been ending his week-long holiday at the event.

Masterton was due to study Biomedical Sciences at Newcastle University in September.

James Lascelles, head teacher of Louth’s King Edward VI Grammar School, where Alex studied, said: “All of the staff and pupils at King Edward who knew and taught Alex were shocked and deeply saddened to hear of his passing at such a young age.

“Alex has been at King Edward’s since Year 7 and had just completed his final exams with us in Year 13 in preparation for a degree in Biomedical Sciences at Newcastle University. 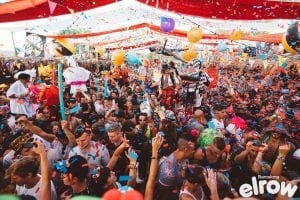 “During his time with us Alex had grown and matured into a lovely lad with real personality. The Sixth Form Team and his teachers were fond of his positivity, warm smile and his sharp sense of humour.

“His loss will be deeply felt by those who taught him and amongst his friendship groups at King Edward’s.

Masterton is said to have fallen ill during the ‘rave’ and was treated by local ambulance crews before being taken to a nearby hospital where sadly he died.

His family have been informed by Lincolnshire Police.

The Elrow club’s anniversary event on the outskirts of Barcelona ran for 16 hours, from 10am through to 2am the following morning.

It is described as ‘a 360-degree day time event with Elrow’s trademark of surreal madness’ by organisers.

Temperatures in the area had peaked at a record 47C during the week.

A Foreign and Commonwealth Office spokesman said: “Our staff are supporting the family of a British man who has died in Barcelona.

“They have offered advice on bereavement abroad and repatriation.”