A NOTICE warning for would-be litterers of fines of up to €3,000 have been plastered around a Marbella town.

Residents of San Pedro de Alcantara have noticed new warnings from the local town hall sellotaped to trees and walls near rubbish bins.

The notice says residents will be fined from between €751 and €3000 for breaking the rules.

The rules state that all rubbish must be thrown out between 8pm and 11pm between April and October and between 7pm and 11pm during the rest of the year.

Paper and cardboard must be put into the blue bins, plastic in yellow bins and glass in the green bins, it warns. 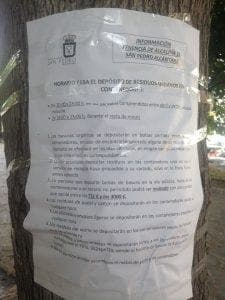 For old furniture, a number must be called to arrange a pick up from the nearest bins.

“Whoever throws rubbish on the street or outisde of the containers and bins, or tries to throw out the rubbish at the wrong time, will face a fine between €751 and €3,000,” the notice reads.

The town hall were unavailable for co

mment at time of press.

It comes after San Pedro and Marbella installed 13 new rubbish collectors at the end of 2015. 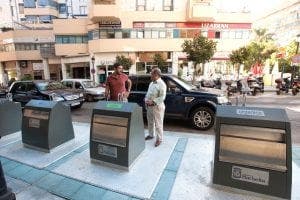 The move was designed to clean up the towns and to be more environmentally friendly by dividing the waste collected into garden, plastic, glass and paper and cardboard.